Jeumont Electric opened a sales subsidiary in the United Arab Emirates in 2010, marking a major step forward in the company’s strategy to expand into the Middle East. Since then, Jeumont Electric has been running aggressive sales prospecting campaigns to reach out to potential customers across the region.

To better serve customers in the Middle East, Jeumont Electric, represented by its General Manager Karim Doha, signed an exclusive sales and service agreement with NICO International, represented by its General Manager Prakash Kumar. The partnership agreement was signed on February 10, 2018 in Dubai. NICO International has been doing business in the Gulf for more than 40 years and is one of the leading providers of engineering and services to the region’s marine and industrial markets. The company has facilities in Dubai, Fujairah, and Abu Dhabi.

The partnership will position Jeumont Electric to broaden its portfolio to cover the industrial electricity production market in the Middle East.

Read more about the partnership: 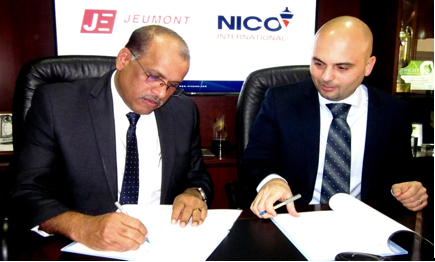